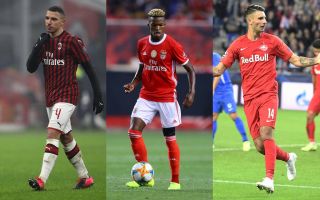 How will AC Milan’s midfield look next season? To date, it’s very difficult to answer this question, mostly because of the uncertainty we find ourselves in but also because of the many targets that have been linked with the club.

As highlighted by MilanNews.it, Lucas Biglia and Giacomo Bonaventura will leave the club this summer as their contracts will expire. Lucas Paqueta also seems destined to leave and the only fixed point remains Ismael Bennacer, who will be the leader.

In recent weeks, three names have been consistently linked with Milan: Florentino Luis, Dominik Szoboszlai and Tiemoue Bakayoko. The Portuguese has been identified as the ideal partner for Bennacer, so much that there is an agreement in principle with Benfica.

The Hungarian, meanwhile, would be an addition for the flank in a more advanced position. He would be similar to Milinkovic-Savic tactically, who has had great success at Lazio. As for the Frenchman, we already know his position as a central midfielder.

If Milan were to bet on Szoboszlai, as the report continues, it’s difficult to imagine a two-man midfield. The feeling, instead, is that Milan will return to a three-man midfield with Florentino as the deep-lying player.

Could Bennacer-Florentino-Szoboszlai be a suitable trio? On paper, yes, but it might take some time. However, the situation obviously depends on Ralf Rangnick’s formation, but that’s something for the German to figure out.