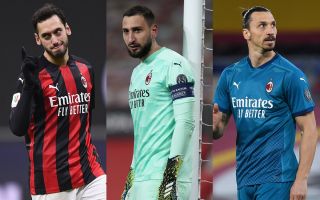 Milan are facing a tough situation as three key players will expire at the end of the season: Hakan Calhanoglu, Gigio Donnarumma and Zlatan Ibrahimovic. The latter will certainly remain, but it’s more complicated for the others.

As reported by MilanNews, especially the situation of Donnarumma is complicated, mainly for the demands that his agent Mino Raiola has laid out. He wants a whopping €10m per year even for a short contract (one or two seasons), as well as a large commission.

For now, Milan have responded with €8m plus bonuses per year for five years but the parties are experiencing a stalemate. The Rossoneri are keen on renewing the deal and Donnarumma has also made it clear that he wants to remain.

Calhanoglu’s situation must also be reviewed. The No.10 started at €6m per year but his requests have actually dropped, unlike Donnarumma. Milan have offered €4m plus bonuses per year and it seems an agreement isn’t far away.

As for Ibrahimovic, he currently receives €7.5m per year and he would like to continue with the club in the Champions League. Negotiations have already begun and the salary should be confirmed, with an announcement imminent.