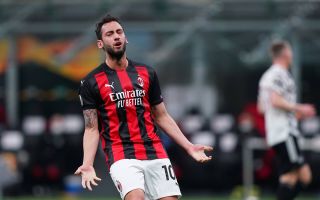 MN: Calhanoglu struggles amid COVID and renewal issue – Milan need him back

Hakan Calhanoglu was a very important player for Milan in the first half of the season, keeping their attack ticking game after game. However, since the start of the year, he has struggled big time to find good form.

As Enrico Ferrazzi of MilanNews writes, where did the decisive Calhanoglu go? From September to December, he bagged six goals and above all provided nine assists for his teammates. Unfortunately, he hasn’t quite been able to replicate this in 2021.

In 12 games, he has just two assists and they came in the same game. COVID struck him in mid-January and this has seemingly had a big effect on him, who is struggling to find his best form physically. He always gives everything, but it’s just not working.

From a player like him, with the qualities he has, the bar is inevitably set very high. Running and fighting for the ball isn’t enough in his position, you also need quality players and decisive passes in the final third.

The No.10 seems to have lost the confidence that allowed him to fly in 2020, as Ferrazzi continues. It’s also possible that the whole renewal saga has affected him, as the parties still haven’t reached an agreement on the matter.

However, it’s clear that if Milan want to have a good ending to this season, they will need the 2020 version of Calhanoglu. We all know just how dangerous the Turk can be when he’s in good form.