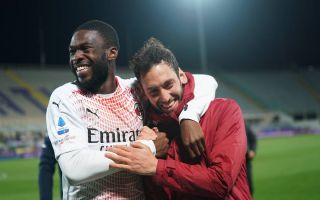 MN: Tomori convinces everyone in two months – he is ‘galloping’ towards permanent Milan stay

Fikayo Tomori continues to convince everyone – fans, the media and the Milan management – as his performances remain consistently impressive.

The Englishman was chosen as the MVP by fans from yesterday’s match against Fiorentina, as Tomori once again showed that he is a central defender of immense quality, and MilanNews write that he is ‘galloping’ towards a situation whereby Milan have no choice but to buy him permanently.

If Milan want to keep Tomori at the end of the season, they will have to pay a sum equal to €28million to sign him from Chelsea, but he is showing himself to be well worth the amount agreed between the two clubs last January. Paolo Maldini and his collaborators will work to try to reduce this figure so that they can then have more liquidity to reinvest to strengthen other departments.

The intention is to keep the 23-year-old for the next few years, because the potential he has shown in his two months at Milan is enough to convince everyone. If he were to be called up by Gareth Southgate for the England squad ahead of the European Championships his value would rise again, and at that point, the figure of €28m would no longer be seen as high.

The club management plans to make the player their own thanks also to the proceeds that will arrive if the Rossoneri qualify for the next Champions League.