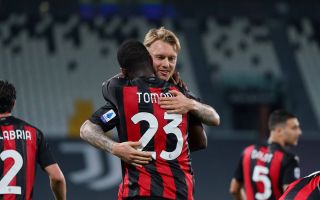 Between departures and signings, Milan have changed the balance of their squad and a new core has emerged. Gigio Donnarumma, for example, was once considered a key but in football, things change.

As highlighted by MilanNews, the new basis for the Rossoneri starts from the defence. Together with the midfield, it’s a starting point that Stefano Pioli should be very pleased with, considering the quality of the departments.

In defence, there are three very talented and reliable players, all led by a great and experienced character. This would be enough to summarise Milan’s defence, made up by Davide Calabria, Simon Kjaer, Fikayo Tomori and Theo Hernandez.

The irrepressible and unstoppable explosiveness of Theo Hernandez on the left, in fact, is balanced by Calabria’s obsessive attention to defensive details. At the same time, the boldness and spectacularity of Tomori’s interventions find a balance with Kjaer’s silent and effective closures.

Milan’s defence, this past season, was made up of the four mentioned plus Donnarumma. The exit of the No.99 and the arrival of Mike Maignan, in particular, is indeed a change to the defensive but it doesn’t affect the mechanism of the team.

READ MORE: Milan left with a Hauge dilemma to solve – the two-fold temptation to cash in outlined