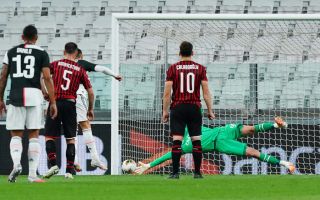 AC Milan failed to knock out Juventus from the Coppa Italia last night, eventually losing on the away goal that the Bianconeri scored at San Siro months ago. However, there are some positives to draw from the game.

It was far from an easy game for the Rossoneri, especially because they were forced to play most of it with just ten men, following Ante Rebic’s sending off. Just seconds before the incident, Cristiano Ronaldo missed a penalty for the home side.

Initially, it looked like a miss from the Portuguese star, hitting the inside of the post. According to MilanNews.it, however, Donnarumma has been awarded the penalty save as he managed to get a slight but decisive touch on the ball.

The youngster has now made three penalty saves this season, per Transfermarkt, also saving the ones of Federico Chiesa and Khouma Babacar. Sadly, his save last night ended up in the shadow of Rebic’s reckless red card.

READ MORE: Pioli praises effort; insists there was a ‘very narrow difference’ between Milan and Juventus