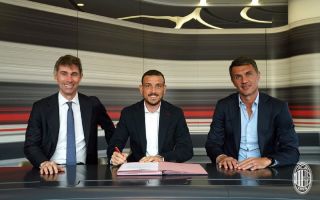 MN: Experience, mentality and versatility – what Florenzi will add to this Milan side

Alessandro Florenzi was announced by AC Milan yesterday and he could already make his debut for them tomorrow. In fact, he’s expected to be on the bench for the opening game against Sampdoria.

As highlighted by MilanNews, the Rossoneri paid €1m for the loan and can make the move permanent for just €4.5m, which is a good deal. In Florenzi, they have signed a strong, intelligent, flexible and experienced player.

He has made himself available immediately and it’s clear that his experience and leadership will be important for the youngsters, both on and off the pitch. As he explained in an interview, he’s just like Kjaer, Giroud and Ibrahimovic in that sense.

In addition to his impressive mentality and experience, he will add versatility to the Rossoneri side. Stefano Pioli will be able to use him as a backup right-back but also as a right-winger, which is a position he has played in a lot.