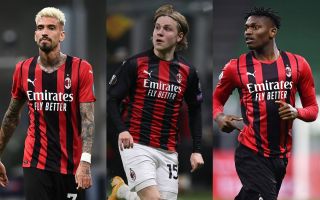 MN: Five Milan players could be axed this summer – latest on offers and demands

In addition to making signings, Milan will also have to offload a few players this summer, not just to make way for the new ones but also for budget reasons. In particular, five players could leave, a report claims.

According to MilanNews, these players are Mattia Caldara, Samu Castillejo, Andrea Conti, Jens Petter Hauge and Rafael Leao. Some of these are considered outcasts, while others are opportunities for Milan to make capital gains.

Hauge has ended up on the radar of Eintracht Frankfurt and the German side have made an offer of €7-8m. Milan, however, want around €12-13m to sell the youngster. Castillejo has several offers from Spain and the Rossoneri want a permanent exit.

Leao has attracted interest from a few clubs abroad and Milan would sell him for a fee of at least €30m. It might be hard to get such an offer, though. Caldara and Conti both have offers in Serie A, with Venezie pushing for the former.

READ MORE: How Milan are set to line up for the 2021-22 season as things stand