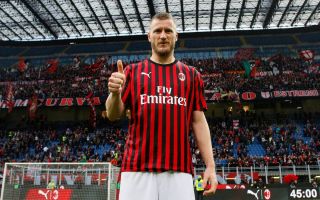 MN: Former Milan man Abate will be the new manager of the U16 side

Ignazio Abate decided to end his career after the 2018/19 season, when his contract with Milan expired. The right-back started his career with the Rossoneri and also ended it with them, becoming one of the fan favourites.

Since December of last year, Abate has been working on getting his UEFA A license along with several other Italian legends. For example, Alessandro Del Piero, Daniele De Rossi, Giampaolo Pazzini and Riccardo Montolivo also took part in the course.

According to MilanNews, Abate is now set to take over Milan’s U16 side, which will be his first adventure as a manager. The UEFA A license allows you to coach all the youth teams, women’s teams and the men’s teams up to Serie C.

Hopefully, the former right-back will do a good job and continue to serve the Rossoneri well. Sometimes, though, it isn’t always that easy to make the transition from player to manager.

READ MORE – Alternative location ruled out for Milan and Inter’s new stadium: “That project is abandoned”