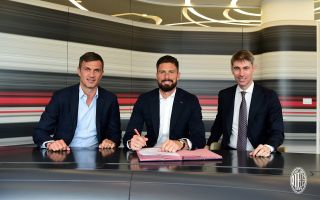 MN: Giroud’s contract includes option for a third year at Milan – the details

Olivier Giroud has been announced by AC Milan, having signed the contract with the club yesterday at Casa Milan. Contrary to previous reports, the Frenchman could stay for more than two seasons.

Milan finally managed to reach an agreement with Chelsea on the basis of a €1m fee, plus an additional €1m in bonuses. Giroud arrived in the city on Thursday evening and had his medical yesterday, completing the move.

According to MilanNews, the striker has signed a contract until 2023 with the Rossoneri, which was expected. However, there is a one-year extension clause in the deal, meaning he could stay for three seasons if all goes well.

Hopefully, having chosen the No.9 shirt, the Frenchman will do well for the club and break the curse once and for all. Competing on three fronts, Giroud could really come in handy for Milan this upcoming season.

READ MORE: Leipzig star remains an option but Milan have their favourite for No.10 role