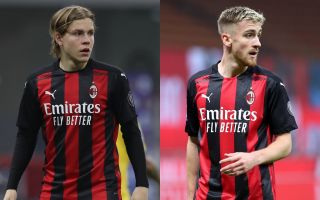 Let’s rewind the tape to the spring when, as a result of the league suspension and few minutes, few thought that Milan would sign Alexis Saelemaekers on a permanent deal. Several months later, the situation is very different.

As highlighted by MilanNews.it, the Rossoneri had already paid €3.5m for the Belgian in January, but COVID complicated the situation. Saelemaekers didn’t have to adapt to Italian football and thus didn’t get much playing time before the lockdown.

Milan, though, believed in him and decided to redeem him in June. Since then, the former Anderlecht man has grown significantly, so much that he’s now an undisputed starter and the €7m fee is looking like a real bargain.

Of the players that arrived this summer, the situation of Jens Petter Hauge reminds us of Saelemaeker’s experience. Both were fairly unknown when they arrived and Milan didn’t pay much to get them to the club.

Perhaps Hauge can follow in the footsteps of Saelemaekers. Of course, it was unthinkable to see the former Bodo/Glimt man in the starting eleven straight away. Yet, as demonstrated by the goal against Celtic, he’s a real asset for Milan.

It will still require a little patience, as haste is never the best option for young players. The 44 minutes accumulated so far by Hauge will grow significantly, and this is something Saelemaekers can sign off on.