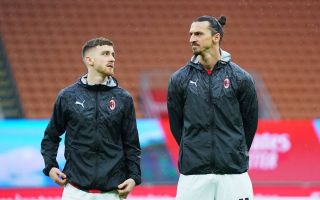 MN: Ibrahimovic immortalised with impressive milestone – he is an example to everyone

Zlatan Ibrahimovic took centre stage again on Sunday, scoring a brace and racking up his 500th club career goal (and 501st) in the process as Milan stuffed Crotone.

As MilanNews writes, the Swede’s career has been all about numbers and words, i.e. the 39-year-old backing up what he has told the media. He scored his 500 and 501 goals in clubs in a total of 825 games against Crotone, reaching certain figures at this age is proof of an impressive longevity but at the same time that the discipline of hard work pays off.

Ibra uses the lion symbol quite a lot to describe himself, and the report adds how he hunts his prey like one and he is also a guide and example for his pack. He knows when to attack, he knows when to wait but at the same time he is aware that to maintain the status of sovereign he must show his strength to everyone.

The story of Zlatan is the testimony that ‘if you believe in something and if you work hard to get it, it will come true. Despite having money and fame and being a celebrity, Ibra has made sacrifices and efforts overcome and achieve that, given his incredibly humble background.

Goals, character and collective challenges are the blend that continues to propel an engine of amazing efficiency.