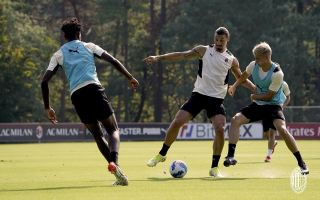 Zlatan Ibrahimovic is not yet well enough to train with the rest of the team and his presence on Saturday against Hellas Verona is now in serious doubt.

According to what is being reported by MilanNews, Ibrahimovic also worked separately today at Milanello and not with the rest of the squad, at least those who are not on international duty.

The Swede continues therefore to try and get rid of his Achilles problem, one which has kept him out since the win over Lazio at San Siro a few games back now. It appears unlikely that Ibrahimovic will even be fit enough to make the bench against the Gialloblu.

It comes after MilanNews reported that a lot of Ibrahimovic’s future beyond the summer will depend on his physical condition and how he finds himself feeling athletically when the spring comes around. The 40-year-old is always welcome at Milan who consider him to be a real leader, but age is may be catching up to him.