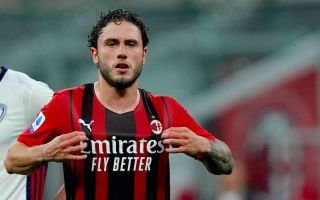 MN: Interlocutory meeting held over renewal of Calabria’s contract but no agreement reached

AC Milan have held a meeting with the entourage of Davide Calabria to discuss his contract renewal, according to a report.

According to MilanNews, there was an interlocutory meeting on Thursday at Casa Milan between Calabria’s agents and the Rossoneri management. The full-back’s contract expires in June 2022 and he currently earns a salary of €1.1m net per season, with numerous sources suggesting that he is in line for a well-earned pay rise after a bounce-back season.

There was no agreement reached in yesterday’s meeting, but with Milan dealing with a renewal at low figures compared to other requests it is expected to be a simpler negotiation. Over the next 10-14 days there will be a new meeting, in which the parties will start moving towards a meeting point, but step will be needed by the club towards the full-back’s requests which have never been anything way above what is expected.