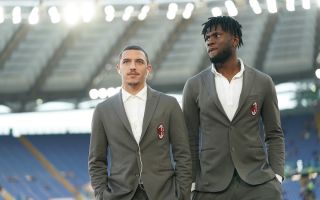 MN: Juventus clash a fundamental test of Kessie and Bennacer’s progress – the specific role of each

Sunday’s crucial game against Juventus will be a fantastic test of the progress Ismael Bennacer and Franck Kessie have made, a report claims.

As MilanNews writes, there are certain football phrases that lend themselves to the upcoming game such as ‘never change a winning team’ and ‘certain matches are won in midfield’. The latter is particularly true, as the Rossoneri will seek victory by relying on its best players and among these are the two starting midfielders: the African duo of Bennacer and Kessiè.

The pair have alrgely been excellent in the post-lockdown period but they have not been seen as much in the current season due to the injury problems that the Algerian has battled. The duo will compete not only with McKennie and Bentancur but also with the quality of Arthur. To face this midfield, they will have to show the quality and work rate that have made them a reliable and well-matched duo.

The tasks will then be very specific: Kessie will have to be the dam to stop the balls directed towards Ronaldo and the Bianconeri forwards, while Bennacer on the other hand will be the driving force of counter-attacks after winning the ball back and will be his usual tenacious and aggressive terrier-like presence.

The Bennacer-Kessie pairing has become a comfort blanket for Pioli, together with Kjaer at the back and Ibrahimovic leading the line. It is an important test for the former Empoli and Atalanta duo to show how far they have come.