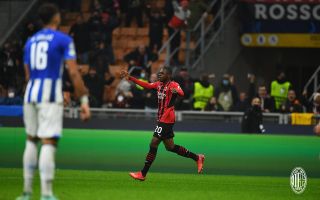 MN: Kalulu rises to the challenge again but a bigger task may await vs. Inter

Pierre Kalulu keeps being called upon in difficult moments by head coach Stefano Pioli and so far he has nearly always delivered.

Pioli has had no problem calling on the Frenchman in times of need, such as last night against Porto when he entered the field at the beginning of the second half in place of Davide Calabria who was struggling with dizziness, among other substitute appearances. His impact was almost instant as his shot forced the equalising goal, too.

MilanNews recalls how Mbemba’s own goal was born from Kalulu’s attempt and ultimately it allowed Milan to capture their first point in the standings in the current Champions League. It is worth remembering too the impact he made after coming on after 45 minutes in Turin against Juventus too, providing much more threat and almost winning the game.

Theo Hernandez will miss Sunday’s derby due to disqualification and with Fode Ballo-Touré still a doubt due to an ankle problem, Kalulu is a candidate for a starting shirt as left-back. In the games against Porto (in Portugal) and Torino he struggled a lot on the left side, but it would be the perfect stage and a huge game to prove that he is even more versatile than first thought.

READ MORE: Milan almost out but not quite – the two ways they can still qualify for the UCL knockouts