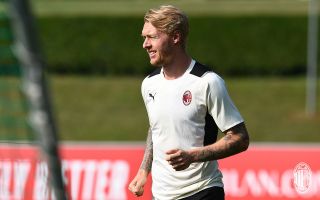 MN: Kjaer’s contract eight months from expiry but Maldini and Massara have a plan

AC Milan are expected to open concrete discussions over the extension of Simon Kjaer’s contract very soon, according to a report.

Kjaer experiencing a magical moment and arguably the best spell of his career both for Milan and for Denmark, where he enjoys the admiration and respect of all his team-mates. The 32-year-old is a strong and experienced presence on and off the pitch, but his contract will expire on 30 June 2022, which means Paolo Maldini and Frederic Massara want to sort his renewal as soon as possible.

According to the latest from MilanNews, the Rossoneri consider the former Sevilla man to be one of the leaders of the squad and that is why the management will not hesitate to extend his contract with the club.

Soon the talks will begin, and it is possible that Kjaer could extend for another two seasons until 2024, as he is very happy at Milan and would be more that content to continue for a few more years.

READ MORE: Kessie offered to Inter by his agent but they cannot satisfy his requests