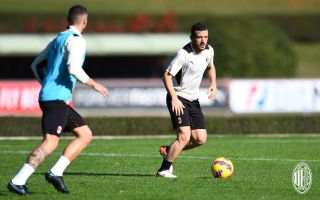 MN: Latest on fitness of six players ahead of Inter clash including Rebic and Ballo-Toure

AC Milan do not have much time to dwell on last night’s 1-1 draw against Porto at San Siro in the Champions League because the derby against Inter is just three days away.

There are a few selection doubts hanging over Milan at the moment as they continue to battle back from an injury crisis that saw their attacking depth severely dented as part of a run of 8 games in 22 days.

According to the latest from Antonio Vitiello of MilanNews on Twitter, Ante Rebic and Fode Ballo-Toure did personalised work as they recover from their ankle problems but they did so on the field suggesting a return to the group is not far away, and tomorrow will be decisive in determining whether they will be available.

Alessandro Florenzi and Pietro Pellegri meanwhile did train with the rest of the squad and should be available for the game against the Nerazzurri. Davide Calabria is fine after coming off at half time last night, while Junior Messias did personal work.