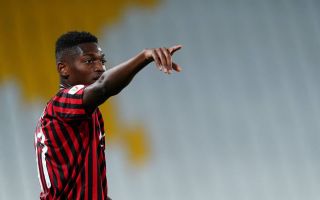 Starting on the bench against Juventus was a clear and precise signal. Although Rafael Leao came on after 52 minutes, he has to do more and he has to do better, because the performances this season have been far from enough.

At the Allianz Stadium, albeit with all the difficulties of the situation, the Portuguese striker had a rather passive impact on the match. This justified the manager’s decision to start him on the bench even more, as highlighted by MilanNews.it’s Matteo Calcagni.

With Zlatan Ibrahimovic injured, and a Milan in need of scoring, Leao would have had to perform really well in training to be chosen by Pioli. Evidently, this wasn’t the case as Ante Rebic was moved ‘out of position’, although his performance wasn’t positive either.

The youngster was brought in to make the most out of his talent, yet his contribution at the club has to be considered insufficient: only two goals, a few good episodes as well as multiple colourless performances.

Many of his predecessors have been thoroughly criticized while doing much better, which should make us think about the future and not only the present. Can Leao be a resource for the new and young Milan?

André Silva and Piatek, despite having scored several goals, have left the Rossoneri after failing to perform on a high level consistently. No regrets, of course, but this calls for us to reflect when evaluating Leao’s season.

The Portuguese international 21-years-old, not 18 or 19. He wasn’t expected to be a starter, protagonist nor top scorer. However, there was always the feeling that he would at least be of good use for the team, although it obviously hasn’t happened.

Ibrahimovic’s injury could have paved the way for him, but he was unable to pounce on the opportunity and Pioli opted for Rebic instead. That being said, there is still time for redemption, but what should Milan do if that doesn’t happen?

After all, they can’t afford to have a striker that only scores two goals per season, which is why the former Lille man needs to step up.

READ MORE: Rebic will not face fine after reckless red card against Juventus