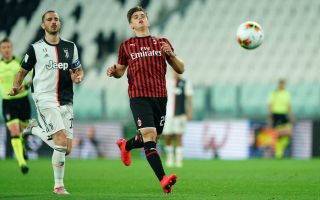 AC Milan have reached an agreement with Primavera star Lorenzo Colombo over a new contract until 2024, according to a report.

La Gazzetta dello Sport reported (via MilanNews) that Colombo could be called up more frequently over the next few weeks especially given the hectic nature of the schedule, and the teenager could establish himself as the back-up to Zlatan Ibrahimovic given his target man style.

According to what is being reported by MilanNews, agent Giuseppe Riso was present at a meeting with the Rossoneri management at Casa Milan on Thursday afternoon.

The theme of the meeting was discuss a new deal, and the report adds that terms have been agreed to extend his current agreement until 2024, with an official announcement expected soon.