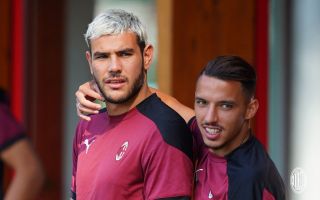 AC Milan appear to have been spooked by the Franck Kessie negotiations as they are now looking at pre-empting two other renewals, a report claims.

According to MilanNews, the management have their eye on the contracts of both Theo Hernandez and Ismael Bennacer. The duo have deals that expire in June 2024 and have relatively low salaries given their current value to the project.

Because there are still three years left on their contracts there should be no rush in setting up talks over a renewal, but the Kessie, Donnarumma and Calhanoglu sagas have made it all of a sudden quite reasonable to think that the management can start looking for an extension until 2026.

If they were to negotiate extended terms it would give Milan new economic power and control on both players. There is of course another factor worth bearing in mind, and that is Bennacer’s €50m release clause which is valid for teams abroad.