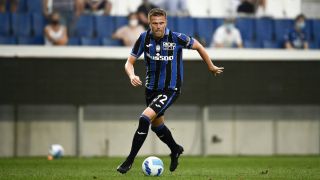 MN: Milan being patient despite agreeing terms with Atalanta forward – their strategy

AC Milan have been able to agree personal terms with Josip Ilicic but are finding it hard to agree a deal with Atalanta, according to a report.

As MilanNews writes, the Slovenia international has long been in the sights of Milan who are always looking for reinforcements for their attacking department. Sporting director Frederic Massara in particular is a big fan of the player, but the satisfaction is mutual given that the 33-year-old would be more than happy to join to Milan.

As reported by Sky, the Rossoneri and the player already have an agreement, while the one between Milan and Atalanta has not yet arrived yet as La Dea would like to raise as much as possible from his sale.

They are asking for around €7-8m – a figure considered too high by Milan for a player who wants to leave and has a contract expiring in 2022 – so the intention of the Rossoneri is to wait until the last few days of the transfer market, with the hope that Atalanta will lower their request and be satisfied with a small compensation.

Pioli details where Milan are lacking compared to elite sides: “We have to raise our level”
27 September 2021, 12:36
Serie A Standings