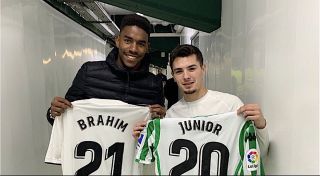 MN: Milan closing in on return of Real Madrid forward; Barcelona full-back an option to follow

AC Milan are moving towards being able to secure the return of Brahim Diaz from Real Madrid for at least another season, a report claims.

MilanNews writes that Brahim’s return to Milan is close to materialising as an agreement has been reached between the Rossoneri and Real Madrid regarding the formula of the operation, which will be on the basis of the loan with an option to buy.

What is currently missing is an agreement on the figure that Milan would pay to Los Blancos to sign him outright as well as some other details, but even in the morning the optimism has grown further regarding his return.

The Junior Firpo situation is one to keep an eye on as well, because the player has been admired by Milan since January, when his arrival in Italy did not materialise. Contacts must be made with Barcelona, so it is a track to follow, but more complex than Brahim.