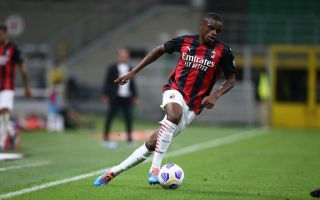 MN: Milan consider sending summer signing out on loan in January due to lack of game time

AC Milan could allow right-back Pierre Kalulu to leave on loan during the January transfer window because of a lack of game time, a report claims.

Kalulu was Milan’s first new signing of the summer as the French right-back joined on a free transfer from Lyon. When he arrived, a number of reports claimed he would begin him time in the Primavera, but he started and remained with the senior squad.

Nonetheless, a couple of months down the line and Milan fans are beginning to question what has happened to Kalulu, given that he continues to be named in matchday squads but has not had a minute of competitive game time.

According to MilanNews, Kalulu hard time finding space because of the competition in his position. At present there is Davide Calabria, Diogo Dalot and Andrea Conti ahead in the hierarchy and the Frenchman has not been used once by coach Stefano Pioli.

Therefore, in January he could leave on loan to find more space, and reflections are underway. A loan would only go ahead with the approval of the player, it must be said.