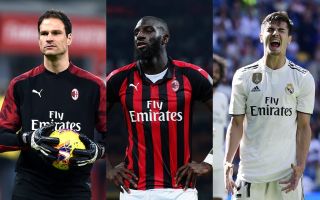 Having reached an agreement with Zlatan Ibrahimovic, whose contract expired at the end of the season, Milan are now focusing on making a few signings. Three of them could arrive soon, a report claims.

According to MilanNews.it, taking stock of the Rossoneri’s market situation, they have made progress for three players in particular, starting with Tiemoue Bakayoko. The contacts with Chelsea are continuous and the feeling is good.

These are decisive days, per what is filtering from the negotiations, to close the operation of a paid loan with an option to buy. In addition to Bakayoko, the signs are also positive for the Brahim Diaz operation.

Real Madrid are seemingly opening to the formula offered by Milan, which is a loan with an option to buy. However, they don’t want to lose control of the player due to his potential and could thus insert a buy-back clause.

Moving on, Asmir Begovic remains the first option for the goalkeeping position, where Milan need a backup. The Rossoneri have also been offered players such as Claudio Bravo and Antony Silva but the Bosnian is at the top of their list.