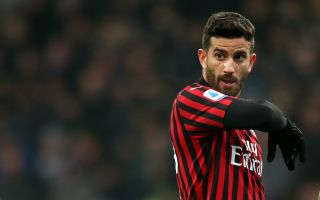 MN: Milan defender heading towards free transfer as Pioli continues to exclude him

A farewell seems almost certain for AC Milan defender Mateo Musacchio, a report claims, as he continues to be left out of Stefano Pioli’s plans.

The Argentine has found himself down the pecking order due to the permanence of Alessio Romagnoli and Simon Kjaer as well as the potential of Matteo Gabbia, leading to suggestions he could leave after three years at the San Siro.

The Argentine has just come back after a long injury, however he has not yet been called up for a matchday squad and with his contract expiring in June 2021, it may point towards a fate already marked.

According to what is being reported by MilanNews, Musacchio has been training regularly with his team-mates for a few weeks but has not yet been called up by Pioli.

At the moment there are no conditions for a renewal of his current deal, and therefore the former Villarreal man could really leave on a free transfer at the end of the season.