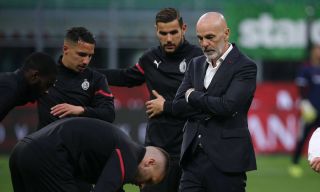 MN: Milan demonstrate lack of Plan B against the low block – solutions are desperately needed

AC Milan’s attacking deficiencies were once again on show during Sunday’s 0-0 draw against Cagliari as they failed to break down a deep defensive line.

As MilanNews writes and as we highlighted in our tactical analysis earlier today, Milan encounter obvious difficulties against teams that essentially aim to cut out the passing lines, line up in their own half with a cautious attitude behind the ball, aim limit the damage and try to counter.

This is the emblematic of the match against Cagliari, who arrived at San Siro from their hotel having just seen Crotone score a late goal against Benevento which sealed their survival for another season. Leonardo Semplici sent his team onto the field the necessary tranquility to wait for Milan, defending with order and compactness.

Their approach meant they never exposed their side to counter-attacks, the strong point of Pioli’s team, who are very skilled and quick in turning defence into attack as seen against Torino. The fact remains that it is hard to find other ways without a centre-forward out there if you cannot play through a team, and Mario Mandzukic only had two minutes in his legs.

Milan know how to thrive in space unpredictability and interchanging of their attacking four, and a mobile centre-forward who does not give points of reference to the opposition defence, but when the spaces are clogged and new ones should be created, everything becomes incredibly complicated.

Milan have not been good enough at home and have dropped precious points against teams like Cagliari, Sassuolo, Sampdoria and Udinese – all of whom they simply have to beat to earn top four.

It is foreseeable that a certain number of teams will show up and play the way that those teams have next season given the Rossoneri’s inability to deploy or rely on a ‘Plan B’. Something needs to change.