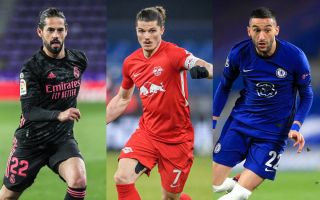 Milan are still looking for a playmaker on the market and have several players on their wish list. Although the pre-season is now underway, they don’t want to rush their decision given the importance of it.

Anto Vitiello of MilanNews has provided some updated on three of the Rossoneri’s targets, who are considered the main ones. Isco has been mentioned lately and Milan have asked for information, but have not gone beyond that.

Furthermore, the salary of the Spaniard way too high and this is a big problem in the operation. Another player is Hakim Ziyech, who could perhaps be allowed to leave on loan from Chelsea at the end of the market.

It would be very difficult to buy the Moroccan but given the good relations between the clubs, a loan could indeed take place. However, since it’s an operation for the end of the market, it’s tough to say now.

Marcel Sabitzer, whose contract with Leipzig will expire next year, is also on the list and quite high up as well. The rumoured price tag is just €20m and Milan could decide to pounce on the Austrian, as they like his flexibility and tactical intelligence.

READ MORE: Calabria the longest-serving Milan player as he prepares for eighth season