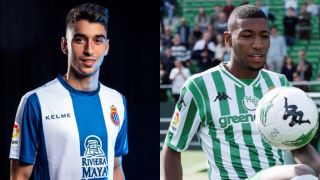 MN: Milan have interest in Barcelona defender and Espanyol midfielder; a striker will arrive

There are a couple of targets in particular that AC Milan are monitoring ahead of the summer window but no concrete steps have been taken towards any target, a report claims.

Milan’s plans have essentially done a complete U-turn in the last couple of weeks. For months it seemed that Ralf Rangnick would be arriving as the new head coach and technical director of the Rossoneri, but then it was all-change.

Last week it was confirmed that the German will not be arriving, as Pioli was instead rewarded with a new deal until 2022 after his excellent post-lockdown form.

The transfer plans are expected to alter now too. According to MilanNews, there are many names that Milan are monitoring with regards to incomings, with Espanyol midfielder Marc Roca and Barcelona defender Emerson Royal mentioned in particular.

However, at the moment there is no record of a lunge for any potential signing as the priority remains the renewals of Donnarumma and Ibrahimovic, and if the Swede remains in attack, a striker will arrive to be his deputy.