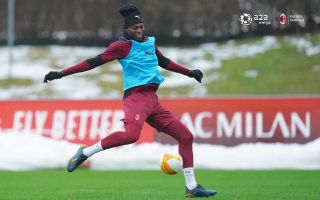 MN: Milan hoping to have star trio back fit for Parma game – the latest from Milanello

AC Milan are hoping to have three of their key players back ready for Sunday’s game against Parma at San Siro, according to a report.

Zlatan Ibrahimovic has missed the last four games with a thigh injury that he sustained during the 3-1 win over Napoli, while Rafael Leao has been out since the most recent international break.

According to what is being reported by MilanNews, Leao first carried out a personalised training session on Tuesday morning and then joined the rest of the team for the last part of their session, showing that he is close to being back to full fitness.

Midfielder Ismael Bennacer is recovering along with Zlatan Ibrahimovic, and although today they still worked individually, the goal is to have them all available for Sunday’s match against Parma.

Stefano Pioli is expected to heavily rotate his starting XI for Thursday’s game anyway, given that qualification for the knockout stages has already been achieved.