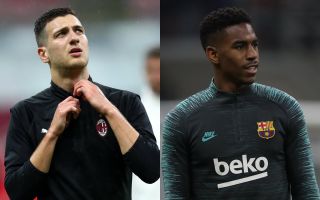 Ahead of the upcoming season, Milan are working hard to reinforce the squad as they need to be at their best, finally back in the Champions League. One of their priorities is the deputies for the full-back positions.

Diogo Dalot spent the past season on loan with the Rossoneri from Man Utd, acting as the backup for both sides of the defence. It seems he could stay for at least one more season, as reported by Anto Vitiello of MilanNews.

Milan are working to secure him on a loan with an option to buy, but it remains to be seen if the English side will accept this formula. Should they be open to it, then Paolo Maldini and Ricky Massara will make a serious attempt to bring Dalot back.

For the left-hand side, Junior Firpo is the primary target of the club and negotiations are already well underway with Barcelona, who are open to a loan with an option to buy. The only thing left to solve is the redemption fee.

READ MORE: Three reasons why Milan are leading Arsenal and Napoli in race for Udinese star