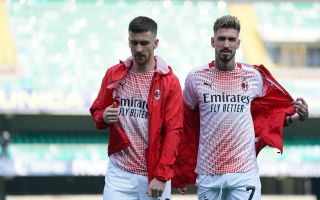 MN: Milan looking for new striker and right winger as duo are set to leave – the names

AC Milan are looking to sign two attacking players during the summer window ahead of the new season, according to a report.

In addition to the renewal of Zlatan Ibrahimovic, MilanNews writes that the management will evaluate Mario Mandzukic based on the end to the season that he has, though it will be an uphill task and only excellent performances could save his future at the club.

The target for Paolo Maldini and Ricky Massara is to buy a striker who can alternate with Ibra, and in addition to the names of Andrea Belotti and Dusan Vlahovic – both very popular but both very expensive – the directors are looking to the European market too.

A new right winger should be signed as Samu Castillejo and Alexis Saelemaekers both leave a lot to be desired in terms of attacking production. Milan scouts continue to monitor Florian Thauvin of Marseille, whose contract is set to expire at the end of the season and so far he has not yet found an agreement for the renewal.

The track had cooled down in recent weeks due to the very high economic demands of the player’s agent, but Thauvin’s is a name that still warms the Milan management. Also in the summer it is likely that Castillejo will be able to leave the club.