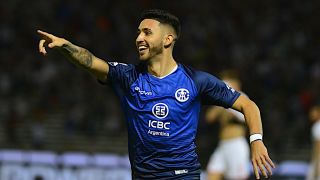 AC Milan have made a bid to sign Talleres striker Nahuel Bustos ahead of the summer window, according to a report from Argentina.

MilanNews – who cite sources in South America – claim that the Rossoneri have acted upon their interest in the 22-year-old by placing a bid of over €10million for Bustos.

The president of the Cordoba club has confirmed as much, but the report also mentioned that Russian side FC Krasnodar are also in the running and are ready to make a similar offer to Talleres.

The centre-forward has amassed 10 goals and four assists in 21 league appearances in the 2019-20 campaign so far, and has also been linked with a move to Roma.

The news of course fits in with recent reports from various media outlets suggesting that the Rossoneri are in the market for a young No.9 to play as a deputy to Zlatan Ibrahimovic, who appears increasingly likely to extend his stay and remain in Italy for another season before possibly retiring.