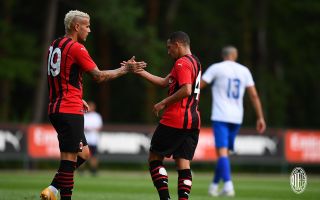 Milan kicked off their pre-season tour earlier today with a friendly against Serie C side Pro Sesto. They managed to find the back of the net six times and didn’t concede either, resulting in a convincing win.

Ismael Bennacer, Rafael Leao, Samu Castillejo and surprisingly, Milos Kerkez X2, were the goalscorers for Milan this afternoon. Pro Sesto’s goalkeeper was also noted for an unlucky own-goal, as an effort that hit the post rebounded off him.

According to MilanNews, Stefano Pioli decided to grant his players one day of rest and that will be tomorrow (Sunday). Training will resume at Milanello on Monday as there are more friendly games to come for the Rossoneri.

Next time out we might see new signings Olivier Giroud and Fode Ballo-Toure involved in the action, as well as Brahim Diaz who has returned from Real Madrid. However, we will just have to wait and see on that.

READ MORE: Giroud heaps praise on Maignan – “He will become the No.1 for France”