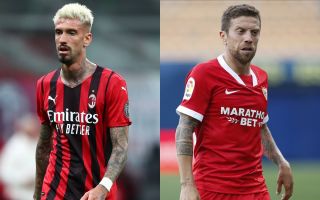 Milan will be looking to part ways with a few players this summer, considered out of the technical project, and they will also need some replacements. Sometimes, the solution could thus be a swap deal.

One of the exit-bound players is Samu Castillejo, who played quite a lot this past season but failed to impress the management point-wise. Stefano Pioli wants a more prolific winger and that’s what he will get this summer.

According to MilanNews, however, although a right-wing replacement is one of the priorities, Milan could use Castillejo’s departure in a different way. Sevilla are interested in the winger and their star, Papu Gomez, wants to return to Italy.

Therefore, the Rossoneri are probing a swap deal involving Castillejo and Gomez. The latter would be a useful player both for the left-wing and the No.10 role, which as said means a right-winger would have to arrive as well.