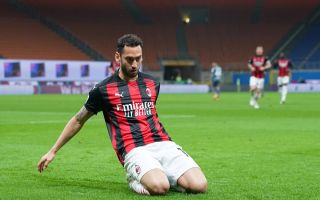 Milan are still in the Champions League after the win against Benevento last night, which gave the fans some positives to enjoy. Although many chances were missed, the ball ended up in the back of the net twice.

Hakan Calhanoglu was one of the goalscorers and he was also behind almost everything when the Rossoneri went forward. The No.10 is crucial for the team with his creativity and last night, we saw a glimpse of what he can do.

MilanNews gave him a 7/10 and named him the MOTM. Diogo Dalot, Fikayo Tomori, Alessio Romagnoli, Theo Hernandez, Sandro Tonali, Franck Kessie, Alexis Saelemaekers and Zlatan Ibrahimovic were just behind at 6.5.

Gigio Donnarumma got a 6 as he didn’t have that much to do in the game, while Ismael Bennacer and Rafael Leao didn’t do enough and got the same rating. The Algerian was very naive as he barely escaped a red card, for example.

READ MORE: Highlights of ‘important’ but wasteful Ibrahimovic in Milan’s win vs. Benevento