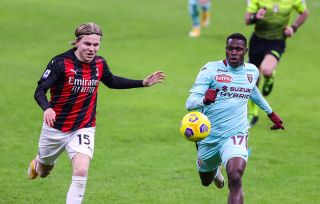 MN: Milan soon to complete sale of duo and could net a combined €16m

There is some movement in the outgoing market for AC Milan as two players are set to depart the club in the coming days, a report claims.

MilanNews reports that yesterday there was another meeting with Venezia over a deal for Mattia Caldara, and the two clubs reached an agreement over a deal that will see the centre-back move to the newly promoted side on loan with an option to buy set at €4m.

Meanwhile, Jens Petter Hauge’s farewell is getting closer and closer, as the winger is one step away from joining Eintracht Frankfurt. The Norwegian talent – who arrived from Bodo/Glimt for €4.2m – is ready to leave for another new adventure, with Milan expecting to collect €12m from his sale.

With his departure Milan will register a good capital gain and will try to reinvest the money to improve the squad in other areas, as per the report.

READ MORE: CSKA Moscow star Vlasic drifting away as a target for Milan – the reasons