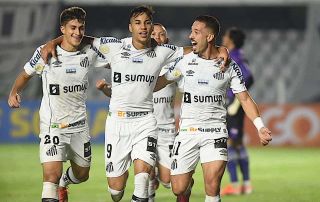 MN: Milan targeting 19-year-old striker to complete the department – he could arrive for free

The hierarchies for AC Milan’s attacking department are clear, as Zlatan Ibrahimovic will be the leader for yet another season.

MilanNews writes that Ibrahimovic will be the starter when he can, the arrival of Olivier Giroud means there is an alternative of similar experience and characteristics, and now younger and more talented third striker is eyed.

Ibrahimovic is the unmovable starter for Pioli’s 4-2-3-1 as he showed last season that he can still be decisive at the age of 39. He is capable of acting both as a finisher and as a playmaker, and he should be back running in two weeks

The physical condition of Ibrahimovic means that Giroud could well be somewhat of a co-starter, but he will turn 35 in the next season, which is why Milan will also look for a third option. The name mentioned is Kaio Jorge, a Brazilian talent whose contract with Santos is expiring. He could join for free in the winter window, or for a small fee this summer.