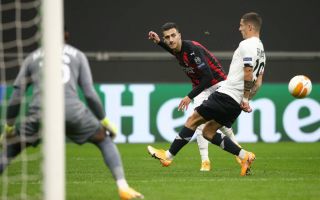 MN: Milan waiting to see the best from Man Utd loanee Dalot – he has the club’s confidence

Diogo Dalot is set to become a pressure resource for AC Milan in the second half of the season, a report claims, starting on Sunday against Benevento.

As MilanNews reports, the Rossoneri got seven points from the games against Parma, Sassuolo and Lazio, thanks to the presence of Theo Hernandez, author of three goals and an assist. On Sunday though he will be suspended due to the accumulation of yellow cards – five during the first fourteen games of the season.

Up steps Dalot to fill his spot on the left side of the back four. Although he cannot be expected to match the Frenchman and finding an alternative of the same level as him would be impossible, the Portuguese will do his best.

Dalot will continue to play the role of first back-up on both sides of the defence, then in the summer he and Milan will think about his future (he is on loan from Manchester United) and the further needs of the squad.

His performances have been fluctuating though, as the 21-year-old has had great games like the pair against Sparta Praha, but others less convincing ones against Lille and Genoa. It is perhaps understandable, given that he has so far struggled to get consistency in terms of minutes and in terms of his role, alternating from side to side.

One thing is for sure though, Dalot enjoys the utmost confidence on the part of the club and could become a very precious resource for the Rossoneri moving forward.