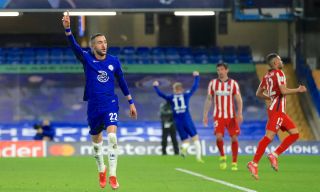 AC Milan have not given up on the possibility of signing Hakim Ziyech from Chelsea and want him for one reason specifically, a report claims.

According to MilanNews, Milan have a list with many attacking midfielders on it and the choice on who will be the No.1 target has not yet arrived because the management wait a few more days. The aim is to be ready when opportunities on loan or with convenient formulas arrive.

Telephone calls and meetings with intermediaries and agents are still ongoing though, and Ziyech of Chelsea is a favourite among the leadership because he can play as a right winger or as an attacking midfielder behind the striker. Ajax and Chelsea agreed a deal worth €40m – potentially increasing to a maximum of €44m when including bonuses – for Ziyech last summer (via Wikipedia)

The No.10 being given to Brahim Diaz would not compromise the arrival of another player in that area of ​​the pitch, also because Milan want to have more than one player per position to avoid problems like in the second half of last season.

In addition to the Moroccan, the name of Nikola Vlasic – attacking midfielder for CSKA Moscow – must be added, but the Russian side need to lower their economic claims and the formula. Marcel Sabitzer from RB Leipzig and Isco from Real Madrid are also on the list, but the salary of the latter is not small.