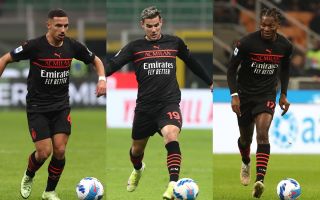 MN: Milan working on renewals of trio as current salaries don’t cut it

AC Milan are working on the renewals of Ismael Bennacer, Theo Hernandez and Rafael Leao. All three have done very well since they arrived at the club and the time has come to reward them for their efforts.

Furthermore, the reality is that several big clubs have set their sights on these players and the Rossoneri don’t want to lose them for free. Admittedly this isn’t a huge risk given the current contract lengths, but they didn’t want to upset the players either.

According to MilanNews, Milan are working on the renewals of the trio and there will certainly be pay rises involved. Bennacer and Hernandez both earn €1.5m per year currently, while Leao has €1.4m per year.

Low salaries, in other words, that will be adjusted in the new deals. It seems there won’t be many issues getting the green light from the players as they are happy at the club.