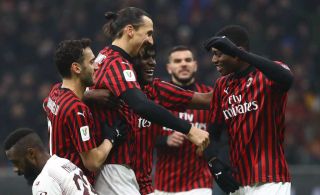 MN: Milan’s core for 2020-21 will start from three contract renewals – all the details

AC Milan have been in fantastic form since the resumption of Serie A, and three players have been instrumental in that in Gigio Donnarumma, Hakan Calhanoglu and Zlatan Ibrahimovic.

As MilanNews notes, the three aforementioned players have contract situations that need sorted, with Ibrahimovic’s deal set to expire at the end of the season while the other two are set to be here until 2021.

On Donnarumma, the Rossoneri may be helped by the fact the Coronavirus emergency prevents large investments, and the player has always expressed his will to remain.

Milan are willing to keep the same salary of €6m-a-year to keep the 21-year-old, demonstrating that the so-called wage ceiling is more flexible than previously thought.

Milan will have to meet with Raiola to define the final agreement, but the feelings are positive and encouraging.

Meanwhile, Hakan Calhanoglu has become a crucial player since the league got back underway, and he wants wants to stay with the Rossoneri and a contract extension is also looming for him.

If the first two would have remained in the Rossoneri even with Ralf Rangnick’s arrival, the same cannot be said for Ibrahimovic. However, with the renewal of Pioli everything has changed and now Milan are intent on keeping him.

Maldini and Massara have already been active in dialogues, and the Swede has expressed his desire to stay. We will have to find the economic framework, but the first step has already been taken.