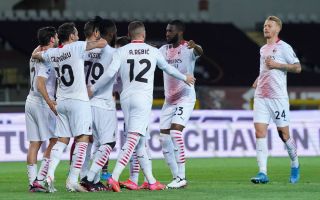 AC Milan were able to get over the line and secure second place in the table thanks to their excellent defence in the last few games of the season.

As MilanNews writes, the Rossoneri fought hard right until the final minutes of the last game of the season to preserve a top four spot but they got one on merit, having almost always been in the Champions League places this season. It was the defensive unit that made the difference in crucial moments as the attack was depleted with Zlatan Ibrahimovic and Ante Rebic out.

The Rossoneri have kept clean sheets in 14 games out of 38 this season, and only Juventus with 38 and Inter with 35 conceded less goals (Milan let in 41). Milan conceded only 8 goals in the last ten rounds of the season and in the last 5 games against Benevento, Juventus, Turin, Cagliari and Atalanta, Pioli’s men did not concede a goal.

For the Rossoneri, such an impressive streakhasn’t been seen since March 2006. Fikayo Tomori was very influential as was Simon Kjaer and the full-backs too, and of course Gianluigi Donnarumma whose future must now be resolved.