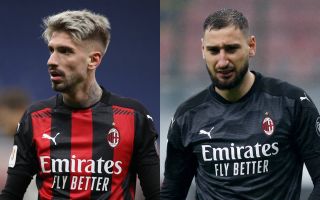 Due to several injuries and COVID cases, Stefano Pioli has been forced to change his starting XI on a weekly basis. Despite this, Milan have continued to get good results and remain top of the league standings.

As highlighted by MilanNews, Gigio Donnarumma has been the most used Rossoneri player this season with 2370 minutes. Then you have the usual suspects, such as Theo Hernandez and Franck Kessie who almost always play.

However, due to the absences mentioned before, there are several surprises in Milan’s most used starting XI this season (based on the minutes). For example, the likes of Ismael Bennacer and Zlatan Ibrahimovic – undisputed starters – aren’t present.

Sandro Tonali and Samu Castillejo, who both have been criticised this season, are present in the eleven with 1496 and 1375 minutes respectively. Down below is the full team, and the data also includes the Europa League qualifiers.

READ MORE – Pirlo names Milan and five others as Scudetto contenders: “This year is special”