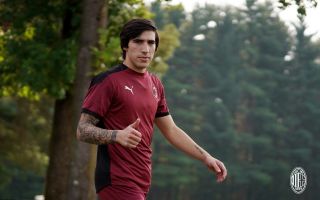 MN: Milan’s probable XI to face Lazio – one position to be decided; optimism regarding Tonali

AC Milan will be looking to round off their year in the perfect way on Wednesday night when they host Lazio at San Siro.

Milan are somewhat of a wounded beast heading into the game as Zlatan Ibrahimovic, Simon Kjaer, Matteo Gabbia, Ismael Bennacer and Franck Kessie will be missing once again.

However, the team will be looking to kick on from Sunday’s 2-1 win away against Sassuolo and sign off a fantastic year on the best possible note by staying top.

According to MilanNews, after his excellent performance against Sassuolo Rafael Leao will start once again in the centre-forward role, while behind him will be Hakan Calhanoglu as the playmaker and Alexis Saelemaekers on the right wing. The battle involves Brahim Diaz and Ante Rebic, and the Croatian will start on the left wing if he is fit enough.

In the midfield Pioli does not have many options, as Franck Kessie will not be able to play due to suspension. Sandro Tonali is doing everything he can to play and the signs are good, but regardless Rade Krunic will be there. If Tonali is not ready, one of Calhanoglu or Calabria would be used.

Gianluigi Donnarumma will be in goal, while from left to right there will be Theo Hernandez, Alessio Romagnoli, Pierre Kalulu and Davide Calabria.