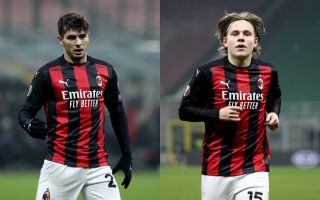 Milan remain the league leaders but they will have to face the upcoming games without their stars. Starting with tomorrow’s game against Sassuolo, it’s time for the youngsters to prove themselves.

Stefano Pioli will have to do without Simon Kjaer, Ismael Bennacer, Ante Rebic and Zlatan Ibrahimovic, but also Matteo Gabbia. All five have been very important for Milan this season and the injury crisis is now worse than ever.

According to MilanNews.it, Pioli will make three changes to the starting eleven for tomorrow’s game. Theo Hernandez has recovered from his minor issue and will start in the left-position, sending Diogo Dalot back to the bench.

Alexis Saelemaekers will start on the right flank instead of Samu Castillejo, but the opposite position is yet to be decided. Either Brahim Diaz or Jens Petter Hauge will start there, with the former currently ahead. Up front, Rafael Leao will play.

READ MORE: Milan intend to fix squad situation in January but now they need to fight