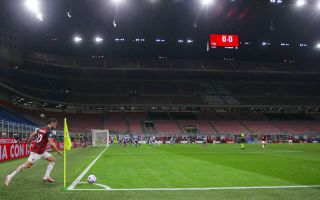 MN: Milan’s worrying 2021 trend against teams around them continues – no goals and no points

AC Milan’s record against teams around them at home this season is a serious cause for concern, according to a report.

The latest setback came on Sunday night at San Siro as the Rossoneri were beaten 1-0 by Napoli in a result which thrusts top four qualification somewhat back into jeopardy. Matteo Politano got the only goal of the game as Milan’s attacking struggles at home continues.

As MilanNews writes, 2020 was an incredible year for Stefano Pioli’s side against the top teams, but the same cannot be said of 2021 which has so far been rather cursed. The team are struggling a lot in head-to-head clashes as they have already suffered four defeats in the new year so far at home.

The first defeat came against Juventus when an injury-riddled side lost 3-1, then a damaging 3-0 scoreline against Atalanta was the second. A 3-0 loss to Inter and last night’s 1-0 defeat to Napoli shows that Milan have not yet figured out their problems at home.