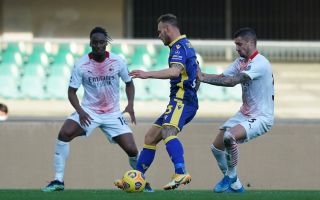 MN: Pioli adapts his tactical approach to get the best out of Meite and Krunic

AC Milan have been able to lean upon their ‘rotation’ players in order to secure big results in the win against Hellas Verona and the 1-1 draw against Manchester United.

As MilanNews writes, going to Old Trafford and commanding the game against a team who beat Manchester City 2-0 at the weekend cannot be considered an accident. The Premier League is the most competitive league in Europe and United, although far from their city rival, is thus far representing the only real “obstacle” for Pep Guardiola’s title.

There have been some difficult moments for the Rossoneri in 2021 so far, something which has been well-documented, and it is down to several factors: such as the accumulation of physical and mental fatigue, injuries, lack of continuity in team selection and the adaptation of opponents.

Stefano Pioli deserves credit for remodelling his architrave, strengthening it starting from the foundation with some players who seemed not good enough a few weeks ago, like Meite alongside Rade Krunic.

Until a few weeks ago it was thought that Milan could not function without Kessie, Bennacer and Calhanoglu up the middle. Sandro Tonali was able to replace the Algerian partially but has his struggles while Brahim Diaz has never been the perfect alter-ego for Hakan. Pioli tried another path, focusing on physicality and athleticism and Milan with Meite and Krunic are less spectacular than before, but they have been able to balance and guarantee more duels won.