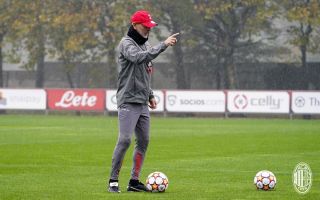 MN: Pioli has two major selection doubts to resolve ahead of Porto’s visit

AC Milan head coach Stefano Pioli has a number of selection doubts that he must resolve ahead of tomorrow’s Champions League game against Port.

MilanNews writes that Pioli has yet to decide who will be the starting centre-forward between Olivier Giroud and Zlatan Ibrahimovic, with the Swede having started during the 2-1 win at the Stadio Olimpico against Roma on Sunday.

Another doubt is about who will play in the middle of the field, given that he will have to pick the right pairing out of Sandro Tonali, Franck Kessie and Ismael Bennacer. For the rest there should be no big news, and Brahim Diaz should return to the field from the first minute as an attacking midfielder after coming back from Covid.

The report also adds that the game is likely to be played in front of a sold out stadium given over 34,000 tickets had been sold as per the last update.