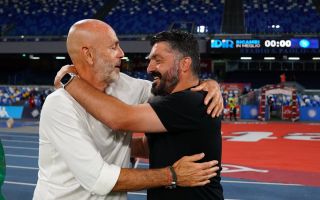 MN: Pioli hoping to extend lead in personal battle with Gattuso – the numbers

Milan will face their former manager tomorrow evening, taking on Gennaro Gattuso and his Napoli at San Siro. The Partenopei need the win to re-enter the Champions League race, which the Rossoneri will try to stop.

As highlighted by MilanNews, Stefano Pioli and Gattuso have faced each other as managers five times. The current Milan manager holds an advantage with two wins: 1-3 at San Paolo in November and a 0-1 win with Fiorentina against Milan in 2018.

Gattuso has one win and that came on the final matchday in the 2017/18 season, as Milan absolutely trashed Fiorentina 5-1. Two of the games, meanwhile, have ended in shared points between the two sides.

Pioli will be looking to extend his narrow lead, therefore, and make it a bit more comfortably ahead of next season. Either way, it’s a very big game for both sides as they need to win to be in line with their respective goals.

READ MORE: Pioli still has a few doubts regarding starting XI for Milan vs. Napoli